The whistle-blowing protestors also forced the closure of the Phuket Provincial Administration (OrBorJor) offices, which are close by. The occupation, with the mob taking over the grounds but barred from going into the building itself, is an echo of the happenings in Bangkok where huge anti-government crowds have occupied a number of government ministries. As the protestors gathered, at 9 am Pol Col Sermphan Sirikong said, “We are ready here. We will have 40 officers here each day.

Phuket is a tourist town so we have explained to the protest’s leaders that we need to be here to make sure everything is going okay. They understand. There is no problem.” The police were supported by 40 volunteers from the Volunteer Protection Office. At around 10 am , blowing whistles and chanting “Ork Pai” [get out] the protestors trooped into the grounds. An hour later, Governor Maitree Inthusut arrived.

The protestors presented him with a bouquet of flowers. Accepting it, the Governor said, “There are five meanings of this bouquet. The first one is protection of the institutions of nation, belief and royalty. The second is that I will preserve my honor as Governor. The third is that I will preserve my honesty. The fourth is that I will strictly follow the disciplines, regulations, and rules of government, and the last is that I will be a good citizen of the nation.” He then walked into the building. Pairoj Sahod, a casual worker who has been in the thick of the anti-government protests since the beginning, told The Phuket News, “I just got back from Bangkok where I joined the protest. There are about two million people in the protest, from Ratchadamnoen to Pinglao.

Six of the Phuket protesters injured in a bus crash on Saturday, while en route to anti-government rallies in Bangkok, were transferred to Phuket hospitals last night.

“They were transferred from hospitals in Surat Thani and arrived in Phuket at about 9pm,” protest co-ordinator Amnuay Kumban .

The two drivers and the remaining 36 passengers were discharged from hospitals in Surat Thani shortly after the accident, Mr Amnuay explained.

“Among them was a 10-year-old boy from Kathu who was on the bus with his parents,” he confirmed.

The protester’s bus departed Phuket at 9:30am on Saturday to join the anti-government rallies in Bangkok, which have taken the capital by storm today .

However they want to go to bangkok .

In Ao Yon and Ao Khao Khad, 3 metre high waves lashed the coast and damaged long-tail boats, yachts, speedboats and sailboats, all anchored close to shore. Some of them were beached.

Pol Lt Col Panya Chaichana, an inspector at the Phuket police station, said some of the boats that had been berthed at Ao Yon were registered to enter the Phuket King’s Cup Regatta scheduled from December 1-6.

More than 20 craft were damaged and the cost to repair them would be around B40 million .

In Ao Chalong, home to many speed boats, tour boats and diving vessels, two boats close to shore were torn from their moorings and beached. Out in the bay, large waves caused boats to smash together. At present, the total amount of damage has not been estimated.

Meanwhile at Rawai beach, a fishing boat was smashed; in Ao Po, 20 fishing boats, which were moored ashore, were all damaged because of the hard-hitting waves, while a house was also destroyed.

Around Naka Island, five fishing boats were damaged. Mr Panya Samphaorat, the mayor of Pakhlok district, along with staff went to inspect the damage, and advised the owners to report it to the local government office.

The Andaman Jet Wave ferry, registered to carry 250 passengers, had yet to begin its daily operations of carrying tourists to and from Krabi and Phi Phi, explained Krabi Marine Police Inspector Chaiyasit Kancharoen.

“It was moored overnight at Tonsai Bay and started taking on water this morning,” Lt Col Chaiyasit told the Phuket Gazette.

“Nobody was on board,” he added.

Strong waves also beached a large cargo ferry, which sustained heavy damage by the pounding of the surf.

According to a TripAdvisor traveller, “Words can’t discern how beautiful these islands are. The dramatic view of the colourful limestone cliffs soaring from the emerald green water is mesmerizing.”

At 2,565 metres above sea level and forming part of the Himalayas, Doi Inthanon National Park in Chiang Mai is Thailand’s highest mountain. With cascading waterfalls, rivers and lush summit forests, the mountains are also home to the Meo and Karen hill tribes aswell as a rare variety of indigenous and migrant birds. As described by a TripAdvisor traveller, “To ride from the swelter of the summer heat up into the cool and the clouds that visited us on the mountain, was almost surreal! The royal Pagodas are a must-see attraction; truly regal!” 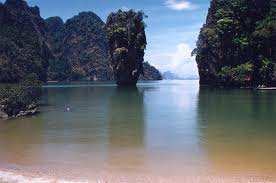 Khao Sok National Park is a virgin rainforest dotted by limestone mountain ranges and high cliffs. Established as a national park in 1980, the poised limestone mountains resemble those in Guilin, China resulting in the local nickname of “Thailand’s Guilin”. Enthused a TripAdvisor traveller, “The park was just amazing. Limestone cliffs, the lake, river canoeing, trekking, cooling off in the pool. If you are travelling to this region and are an outdoors person, then definitely visit the national park.”

Chinese officials confirmed that a consulate in Phuket will be operational by next year in order to cater for the dramatic increase in Chinese nationals visiting the island.

“The plan to establish a Chinese consulate in Phuket has been approved. However, we still need to find a place for it, as well as personnel,” the Chinese Consulate General in Songkhla, Zhang Jinxiong, told Phuket Governor Maitri Inthusut at a meeting this morning.

“Having a consulate in Phuket is necessary. As we know, Phuket welcomes a lot of Chinese tourists to its shores. With more people arriving every year, there simply will be more problems that need to be taken care of,” Mr Zhang said.

“We want to be close to our people, so we can support them while they are travelling in Phuket,” Mr Zhang .

Mr Zhang encouraged all Chinese tourists planning a trip to Phuket to check the government website for news and travel information. Additionally, he warned tourists against swimming in no-swim zones, which are clearly marked with red flags by Phuket lifeguards.

However China tourist is the problem in many city in the worlds , because they always loudly speaking .

A court to solve problems for tourists opened in the resort island of Phuket on Tuesday, amid plans to expand the concept to other popular destinations including Bangkok.

Virat Chinvinitkul, secretary-general of the Courts of Justice, promised quick rulings on all conflicts for local and foreign tourists who take their problems to the Phuket provincial court in Muang district, which has a new division to cater to those visiting the island.

The tourist court in Phuket is the third to open. Pattaya launched its own tourist court on Sept 5 and Suvarnabhumi airport opened a courtroom for foreign plaintiffs on Monday.

Around 10 million foreign tourists came to Phuket during the first 11 months of the financial year to August. The Tourism Authority of Thailand’s Phuket office projected 12 million visitors to have visited by the end of this month.

Office director Charnchai Duangjit on Friday forecast 14 million visitors will travel to the area in the next financial year, with wealthy tourists from China, Russia, Germany and Australia the main targets.